Updates from the Orford Bird Sanctuary

This monitoring had been conducted by Dr Nicky Meeson, Biodiversity Officer from Glamorgan Spring Bay Council. Nicky has now left the council so from 08/02/2022 onwards the weekly bird count is being done by one or more volunteers from the Friends of the Orford Bird Sanctuary.

Note: This monitoring is only a count of the birds which are visible from the perimeter of the sanctuary, it isn't a comprehensive count of all the birds that maybe in the sanctuary at that time.

For previous counts see:
Weekly shorebird count from 25/07/2019 to present

At the last meeting of the previous Glamorgan Spring Bay Council, on the 25/10/2022, the council voted to endorse the Orford Foreshore Masterplan as follows.

That Council:
1. Endorse the Orford Foreshore Masterplan in the form of Attachment 1.
2. Does not agree to enter into a lease/licence for the Prosser River Training Wall (sandbags), nor accept responsibility for any maintenance or management of this infrastructure.
3. Review the outcomes and time-frames on a regular basis with the aim to have the implementation of the management plan finalised within 5 years.

View the Draft Orford Foreshore Master Plan which has been commissioned by the Glamorgan Spring Bay Council and the Parks and Wildlife Service. The plan assesses and makes recommendations for the future management of the foreshore reserves from Raspins Beach to Millingtons Beach, including the Oford Bird Sanctuary.

Consultants, Inspiring Place https://www.inspiringplace.com.au/, in conjunction with North Barker https://www.northbarker.com.au/, have been engaged by Glamorgan Spring Bay Council and the Parks and Wildlife Service to prepare a Master Plan for the management of the Prosser River foreshore reserve and the Orford Bird Sanctuary. Recently they visited the Sanctuary with Dr Eric Woehler, Convenor of Birdlife Tasmania, to gain expert insight into the complexities of this Important Bird Area!

Spring time here has seen the appearance of a Red Necked Stint, two Caspian Terns, and a start to breeding by Hooded Plovers, Red Capped Plovers and Pied Oyster Catchers! Two pairs of Fairy Terns have also been spotted. 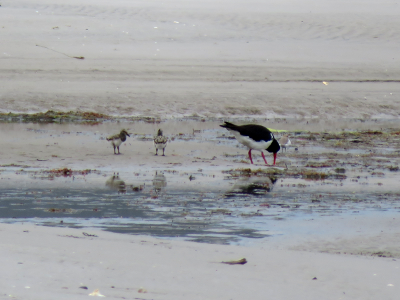 October has seen the start of the breeding season for the Red Cap Plovers, Hooded Plovers and Pied Oyster Catchers here at the Orford Bird Sanctuar.

One of the council's NRM officers has been putting up temporary fences around each nest / nest area in an attempt to keep the nests safe from wandering humans. Additional temporary signs have also been in place since the start of spring.

Two to three Fairy Terns have been seen flying around on a number of occasions.


If above link doesn't work, use this one.

I visited the colony yesterday afternoon to survey the breeding Fairy Terns. I am delighted to report that 34 chicks and fledged juveniles were observed. This total comprised approximately 20 chicks that were too young to fly, and at least 14 flying juveniles that had successfully fledged but were still in attendance at the colony. The colony was very busy and very noisy, with foraging adults feeding chicks predominantly inside the eastern extent of the fenced area and on the adjacent foreshore. Foraging trips by the adults were from both the backwater and from the bay east of the colony.

On two occasions, boats with fishers on board entered the channel - all roosting Fairy Terns and Crested Terns immediately flew off the bags - any claims that the terns 'tolerate' these events are baseless and easily refuted.

An estimated 26 adults were in view, in the colony and feeding chicks. Thus, on 13 Feb 2020, a total of 60 Fairy Terns were observed (26 adults and 34 chicks and juveniles). This is the most successful this colony has been for more than a decade. 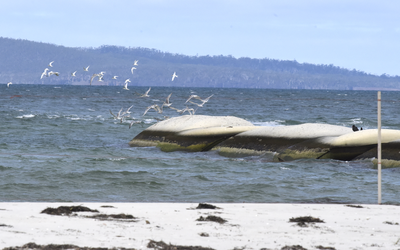 I would encourage Council to maintain the fence and protective measures around this critical shorebird and small tern site that is internationally recognised for its contribution to the conservation of global biodiversity as an Important Bird Area.

Obfuscation by residents raising "concerns" about high tides are designed to introduce doubt in Councillor's minds. The colony's success undermines the various claims by fence opponents.

I remain open to discussions with Councillors who wish to protect the site. 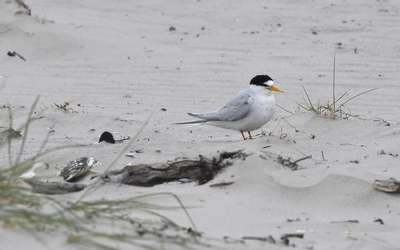 A CRITICAL update to the Fairy Tern colony status at the Orford Bird Sanctuary following my second visit to the site today.

I visited the colony this morning (21 Jan 20 08:13 - 09:15 AEDST) and there were at least 25 adult birds sitting on nests - either incubating eggs or brooding very small chicks. At least another 20 birds were observed returning to the colony to feed partners and chicks.

Many adults were observed feeding in the backwater - more so than in the bay east of the Spit. Clearly, the backwater remains a critical feeding site for the nesting terns.

At least 6 chicks of various sizes were observed running around the colony being fed by adults during our visit.

I believe that there are still close to 30 active nests present in the Sanctuary - comprising incubating and brooding nests with sitting adults, and nests whose chicks have started to roam in the vicinity of the nest/territory.

Remarkably, at least one Little Tern (Critically Endangered) was observed in the colony - its behaviour strongly suggested breeding but I could not see its partner or its nest. If breeding, this is only the 3rd known breeding pair for this species in Tasmania this season (the other pairs are on King Island and Cape Barren Island).

I strongly urge Council to reject any proposal for removing the fence around this colony. The colony's conservation status is increasing and is of national and international significance. The selfish wishes of a handful of locals is no basis for the loss of this site of International conservation significance.