The Birds of the Orford Bird Sanctuary

Up to 25 species of permanent and migratory shorebirds have been recorded in the sanctuary, and up to 14 species at a time, not including other bird types which can also be spotted there at various times.

The Australian Pied Oystercatcher, Hooded Plover and Red-capped Plover are the three species that breed in the sanctuary and inhabit it thoughout the year. The Fairy Tern is a notable species for which the Orford Bird Sanctuary is an important breeding habit. Although the fairy tern is migratory and doesn't always choose to bread at this sanctuary, this site has been used intermittently for decades. The summer of 2019-2020 proved to be a very successful breeding season with 34 chicks confirmed from that period. 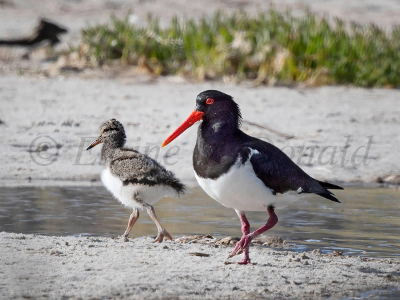 Pied Oystercatcher adult and chick
click on photo to enlarge

Pied Oystercatchers are long-lived birds - the oldest known in Australia is a bird in southeast Tasmania that is almost 35 years old!

The Orford Bird Sanctuary supports up to 7 pairs of Pied Oystercatchers through the year. They are the original 'locals'. They lay 2 or 3 large eggs (similar to chicken eggs in size) that are splotchy and well-camouflaged against the sand and shell grit.

Their long breeding season means that they can only raise a single clutch of chicks in a season. If they lost their eggs or chicks, they may re-lay, but the odds of a successful breeding rely on no disturbance, like all the other shorebirds and terns breeding in the Sanctuary.

We ask that people stay outside the fence and give our Piedies the very best chance of breeding success! You can watch the babies from the path foraging at the waters edge with their parents and really truly, they are just so CUTE!

Did you know that the Eastern Hooded Plover breeds from August all the way through to April.

Although they are well adapted to life on the beach ...... things have changed alot. Especially at the Orford Bird Sanctuary, factors such as the sandbags and ever increasing visitors having a major impact. Today Hoodies can struggle to find undisturbed spaces to breed on any beach anywhere. That is why their numbers are declining around Australia as their nesting failure can be up to 90-95%. That is too few young to sustain the population!

Introducing another of our gorgeous resident beach nesting shorebirds - the Red-capped Plover.

You can pretty well always catch a glimpse of these little delights at the Orford Bird Sanctuary. Surveys in late November 2021 by BirdLife Tasmania counted 21 individual birds including 9 fledglings. So good to have such a successful start to a breeding season.

But the fledglings are still vulnerable to disturbance by humans and dogs with the summer holiday period being a crucial time for the little birds survival. We hope everyone does the right thing and stays out of the sanctuary. So many other awesome beaches close by for the humans to hang out on.

Fledglings cannot yet fly so are very very vulnerable, and they need to feed A LOT so they can flourish. These cuties need space to get to the waters edge to feed safely. 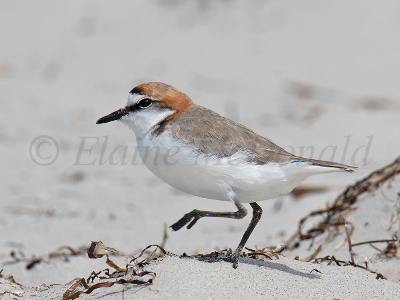 The Fairy Tern is one of Australia's smallest terns and visits the Orford Bird Sanctuary in late spring into summer to breed in a colony. It is a sight to behold to see the Fairy Terns plunging into the shallow backwater catching fish to feed their fledglings.

This is the southern most breeding site for Fairy Tern colonies in Australia, with now less 200 birds known to breed in Tasmania. Fairy Terns are listed under the Federal Environment Protection and Biodiversity Conservation Act 1999 as Vulnerable, and Threatened under the Tasmanian Threatened Species Protection Act 1995. Despite these listings this stunning tiny bird, that migrates from mysterious places to breed in our patch, is sadly still disturbed during breeding by humans and sometimes even dogs although they are strictly prohibited in the bird sanctuary.

Every unsuccessful breeding season is a step closer to extinction. Extinction is forever!

At least four species of migratory shorebirds use the Orford Bird Sanctuary during their migration including the Red-necked Stint. They will typically stay for a few days to eat enough to build body energy (fat) reserves before starting the next legs of their migration.

These tiny birds, weighing less than a box of matches, nest in the Siberian tundra, covering thousands of kilometers in their journey to southern Australian coastlines. Disturbing these long-distance migrants reduces their chances of migrating successfully, as they use their body energy reserves to escape from people and dogs, rather than storing in preparation for migration.

Please stay outside the fence as you can still observe the gorgeous tiny birds without disturbing them. It is a fascinating and complex place the Orford Bird Sanctuary. 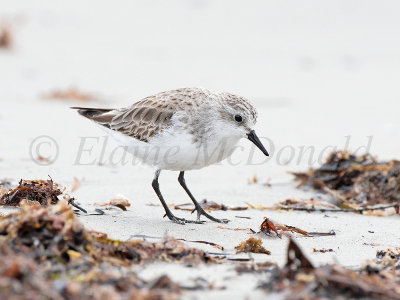 Introducing another regular presence at the Orford Bird Sanctuary. The delightful Crested Terns.

These seabirds can be seen swooping and diving for fish in the backwater or in the channel. At times during the weekly survey there are flocks of way to many birds to count. Even up to 80 + birds at times.

Crested Terns breed in colonies on small offshore islands. If you head down to the Orford Bird Sanctuary today you are very likely to see one! Make sure that you stay outside the fence to watch the show.

While not always present at the Orford Bird Sanctuary, one or two Caspian Terns were regulars from spring 2021 through until the end of March 2022.

Caspians are the largest terns in Australia and quite an impressive sight when in flight, especially when hoovering above the water looking for their next fresh, fish dinner! 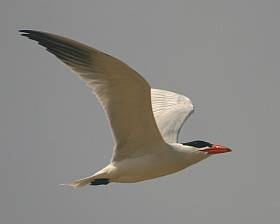 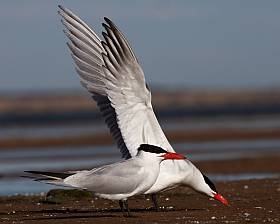 What a stunner is the Black-faced Cormorant. One or two of these beauties appear at the Orford Bird Sanctuary every now and again.

They are one of Australia's only cormorants that does not go inland but is confined to inshore marine habitats.

They are very conspicuous when they are visiting the Orford Bird Sanctuary, foraging in the backwater for small fish or perched on logs with their wings outstretched appearing to dry their feathers. They often roost in the company of other birds.

You can snap a great picture just using your phone from the outside the Sanctuary without disturbing any of the birds.


photo by Eric J Woehler
click on photo to enlarge

The great cormorant is another occasional visitor to the sanctuary. One or more of these, the largest cormorants in Australia, have been recorded here on 29 occasions over the last 2 1/2 years during the weekly bird count.

Like other cormorants, the Great Cormorant feeds mainly on fish, supplemented in freshwater by crustaceans, various aquatic insects and frogs. The Great Cormorant is an excellent swimmer and captures its food in shallow underwater dives, normally lasting up to one minute. Underwater, it swims and pursues prey using its feet but not its wings. Outside of the breeding season small groups are formed although birds are often seen fishing alone. 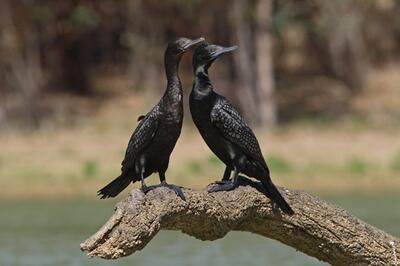 The little-black cormorant is an occasional visitor to the Orford Bird Sanctuary and can most likely be seen there during a 3 - 4 week period during mid-spring.

The Little Black Cormorant is one of only two totally black cormorants in Australia, with the other being the much larger (70 cm - 90 cm) Great Cormorant, which has a yellow bill, face and throat and a white chin.

photo by Eric J Woehler
click on photo to enlarge

It is not uncommon to spot a little-pied cormorant in the sanctuary keeping an eye on the comings and goings, or sometimes doing a spot of fishing.

It is often sighted in an elevated position, sitting on the jetty in the lagoon or on an overhanging tree branch, and usually away from the other birds

The little-pied cormorant is one of the two smaller cormorants to be sighted the sanctuary. The other being the little-black cormorant.

What a character is the White-faced Heron.

On most days you will see one or two or even three hanging around in Orford Bird Sanctuary backwater.

The White-faced Heron is such a versatile bird and can be seen in many different wetland habitats. From rock pools, estuaries and mudflats by the coast to swamps, dams and rivers.

You will see them foraging in the backwater for a range of prey, including fish and insects.

Although common these birds are another important element of diversity found in the Orford Bird Sanctuary.

You can easily see these elegant birds, even without your binoculars, from outside the fence as you wonder past.

A regular site at the sanctuary during the cooler months of the year is the Australian Pelican.

Quite often during that period it is likely that four or more of these impressive creatures will be just 'hanging out' by the lagoon. Occassionally some will be swimming in the lagoon in search of a tasting morsel. See the video on the Photos page: Pelican movie

Another site to behold is when the pelicans decide to take flight and quite quickly arrange themselves into a formation as if part of an aerial display. 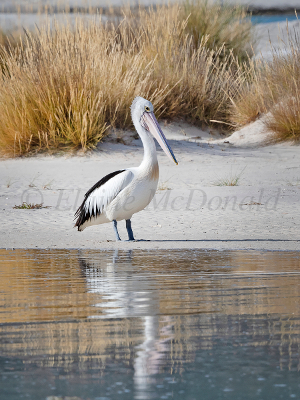 At the bird count on the 4th January 2022, 32 Masked Lapwings were seen in the Orford Bird Sanctuary.

What is going on with all those Masked Lapwings? Clearly the Orford Bird Sanctuary is the place to be!

Here are some Masked Lapwing photos to remind you just how AMAZING parents they are and just how CUTE the babies are! 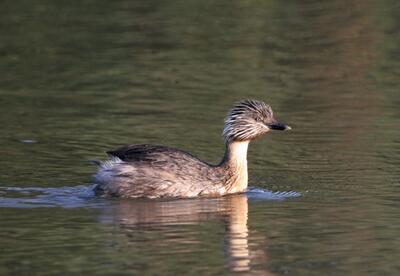 Hoary-headed Grebes are often seen from winter through to mid to late spring. Over the last two years during winter they seem to be seen as a group of up to 10 swiming and diving underwater looking for tasty snacks. They can be quite difficult to accurately count as they duck underwater frequently.

The Hoary-headed Grebe feeds on aquatic arthropods, mostly caught by deep diving. This species feeds during the day, and when the light is poor, forages mostly at the water surface.

These sweet little dabbling ducks are regulars at the Orford Bird Sanctuary. Sometimes just one or two. Other times there is a whole swag feeding at the water's edge during the rising tide, or dabbling for food while swimming.

These guys are one of the few ducks that can tolerate high salinity water, although they still need fresh water for drinking.

They breed in in coastal areas, needing hollow trees in water or short grasslands near the water for nesting. At times we see ducklings together with their parents in the backwater. 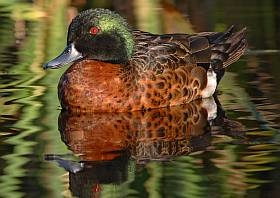 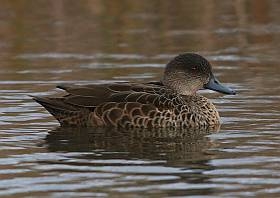 One, two, or three pacific gulls are frequent visitors to the Orford Bird Sanctaury.

Australia’s largest gull, the Pacific Gull occurs only along the coasts of southern Australia. Despite its name, the species is seldom seen on the Pacific coastline, and is far more common on the beaches bordering the Southern and Indian Oceans. They breed in colonies on islands, extending from the Furneaux Group in eastern Bass Strait, west to Shark Bay, WA. 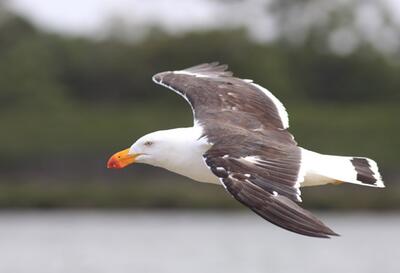 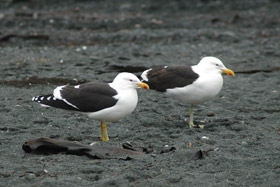 Although an infrequent visitor to the sanctuary one or two kelp gulls can be seen there on occasions. They are slightly smaller than the pacific gull, have different wing and tail markings, and only have the red tip on their lower beak.

Although the kelp gull is the least populous of the gulls that breed on the Australian coastline, they are especially common in Tasmania. One or two can often be spotted at other beaches around Orford, or siting high up on the street light on the Prosser River bridge. 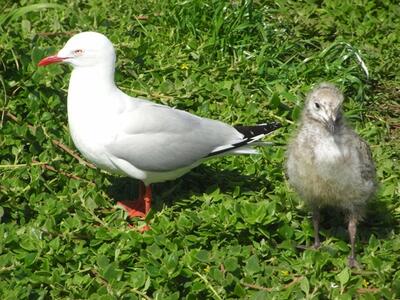 Not too many days would pass at the Orford Bird Sanctuary when there wouldn't be at least 5 or 6 silver gulls lurking around.

The smallest of the three resident gulls in Australia, the silver gull is also the most populous.